Workers have two distinct roles: vanilla worker, or warrior (aka soldier aka military aka "mil").

There's three of you, and you need to decide whose going to be taking on which worker roles, and which objective you will be pushing.

This is where Voice Chat is critical and the start of the match. Use voice chat to decide who is going warrior, what kind of warrior, and if you are going berries or snail to start.

Alternately, use Alerts and Emotes and pray your teammates get the message.

Broadly speaking, Berries are the strongest objective to push. Don't underestimate them.

Learn to throw berries into the hive, rather than just running them in.

Throwing berries save you:

There are two kind of berry throws:

Try going into one of the game's tutorial levels, and practice your berry throw tech there.

Note: Berry throws can be risky on some maps, as you could throw a berry into the enemy hive.

First off, don't be discouraged if you're dying all the time as a drone! For an ordinary worker, the consequences of dying are measured in seconds. Your objective is not to avoid dying at all costs, but to make it so that the enemy wastes more time killing you than you waste by dying.

"Flexing" refers to shifting roles as a worker depending on the game state. Try to do whatever is free! - If you're running berries and a warrior is "ledging" (guarding your hive), Mil up or go snail! - Pass berries to team mates if you see that they're in the hive and you have a good throw. - Don't be afraid to throw berries at the opponent's military to give your team an edge! They get stunned for a second when they're hit, which might give your team an opening

From the Visual Guide

A warrior's role can change frequently throughout a game. Always be aware how the opponents are trying to win, and how close you both are to victory, when deciding what to do as a warrior. 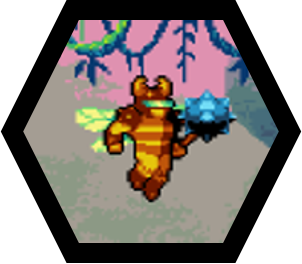 Swords have the greatest mobility of the warriors and excel at chasing away opponents and controlling tight horizontal spaces.

Maces lack the burst-mobility of the sword, so they rely on spacing, angles and timing to stay alive. Your ability to succeed as a mace hinges on your capitalizing on your opponents' mistakes. Position yourself away from the business-ends of other weapons (straight across a warrior, under a queen) and float in for the strike!

Vs. Queens: - Always move away from a queen! You can punish them by causing them to miss a max-range dash. - If a queen tries to dive down on you, move UP LEFT or UP RIGHT, whichever is further away from the queen. You can kill the queen by getting them to one of your sides - If a queen is above you, try to get under a platform and away from them, so that they'd have to do a max distance dash out of their dive to get you. - Try to be above a queen if possible

Vs. Swords: - Try to be above or underneath them, or at the edge of their dash range. Rise or fall into them.

With its long range, the gun shines at controlling horizontal space just by existing -- opposing queens and warriors have to respect your ability to lock them down if they stray into your attack space.